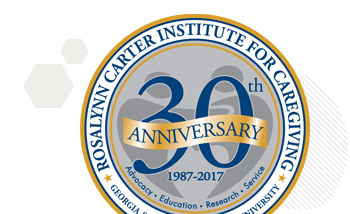 Good Morning Ladies and Gentleman!
It is a great privilege to be here at the Rosalynn Carter Institute’s 30th Anniversary. I am also feel very honored to have this opportunity to share with you some of the similarities and differences we face, as both our societies’ demand for care-giving is ever not only increasing, but also broadly changing. Aging is a fact of life, and to become dependent on care is a universal human condition wherever we may come from.

As in the United States, Korea’s population is aging very rapidly. Demographics show that the elderly people who is over 65 years old exceeds 14% of total population and Korea becomes an aged society this year. We also expect that by the year 2060, 40% of our population will be over 65 years-old. And the regional variation is also significant, especially the aging index is much higher in rural areas.

More disturbing is the fact that this elderly population is far from healthy. The prevalence rate of chronic diseases among the elderly, such as high-blood pressure, heart diseases, and/or diabetes, is presently at 89%. And one in ten elderly persons will be afflicted with dementia.

Before we even knew it, Korea was already facing a care-giving crisis. As the whole nation became invested in economic development, caring for a loved one was often relegated to a non-issue and a personal problem. The good news is that our government has responded with a state-sponsored long-term care program. But this program is still young, and adequate care is often not available. So, many families follow the tradition of filial piety. In our culture, caring for an elderly person within the family was considered a moral duty.

When I was studying in the US, that was in the early 80’s, Care Bear dolls were released and became very popular in the market. By seeing Care Bears gained popularity so quickly I could imagine that there is a spirit of caring for other people in your daily life in the US. Even if the social environment and ways of thinking may different between two societies, I believe that the root of the fundamental activity of caring for others must be the same.

I have parents who are over 90 years old. We do not live together because they want to live independently. But it is true that they become increasingly concerned and I feel that I have an obligation to give back what I have received. It is clear that all of us have not come here alone, but that we have come to be supported by many people including parents, relatives, friends and many others. Regardless of who they are we owe them a lot of things if you could count them accurately. So it is time to give it back to them. I have been an educator for long time and feel that the philosophy of education and care-giving are very similar. If we express it in one word, it is "giving". The better we do in giving, the better our society will be.

Not surprisingly, Korean care-givers face the same challenges and difficulties as care-givers in America: frustration, isolation, physical and mental health problems. Many of them are “hidden patients,” just as their American counterparts.

Given this context, it was our good fortune that a partnership between the RCI and the Cyber University of Korea was borne out of the friendship of our former respective University Presidents, with the blessing of Mrs. Carter. Together, we developed “The Care-giving Curriculum,” comprising of six courses at the undergraduate level. As a comprehensive, interdisciplinary, and practice-oriented curriculum, our “Care-giving Curriculum” was the first of its kind offered in a university program. Our goal was to create a pool of professionals sensitive to the urgency of care, who would help care-givers “care for themselves.” The response of our students toward this Curriculum has been overwhelmingly positive. For those who had been care-givers, the courses told their own stories and showed them how to face and overcome challenges. And for those who had no notion of care-giving, the Curriculum became an eye-opener. I believe the Curriculum was successful because it resonated with the reality of our students. Everyone could see themselves as adult children to elderly parents, or as a spouse to a chronically ill husband or wife. Here again, we see care-giving as a universal condition, one that we may face one way or another, within our lifespan.

Despite the favorable responses, we faced hurdles and obstacles all the same. The biggest obstacle we faced was a lack of awareness and understanding on care-giving. It is difficult to warrant success in advocacy without public awareness.

So I am very happy to announce and share with you, that our University was just awarded a grant by the Hana Financial Group in Korea, to begin a Care-giver Awareness Education Campaign. We hope that this will encourage care-givers to identify themselves as care-givers, and to seek assistance from friends and family as well as the state. We hope that this will also lay the ground for developing and implementing evidence-based programs, jointly with the RCI.

Again, working with the RCI to educate our students and the general public in Korea, about the challenges that care-givers face, has been a great privilege. We remain committed to creating a care-sensitive social environment, and look forward to many more years of collaboration with the RCI in care-giver education, research and practice.

Now I would like to congratulate the 30th anniversary of RCI and continue to thrive. And I am closing my speech with the sign of “Care A Lot” as appeared in the TV commercial of Care Bears that I remember.

Thank you and God bless you all.